Who Is Archangel Ariel? (Lesser Known Aspects of Angel Ariel) 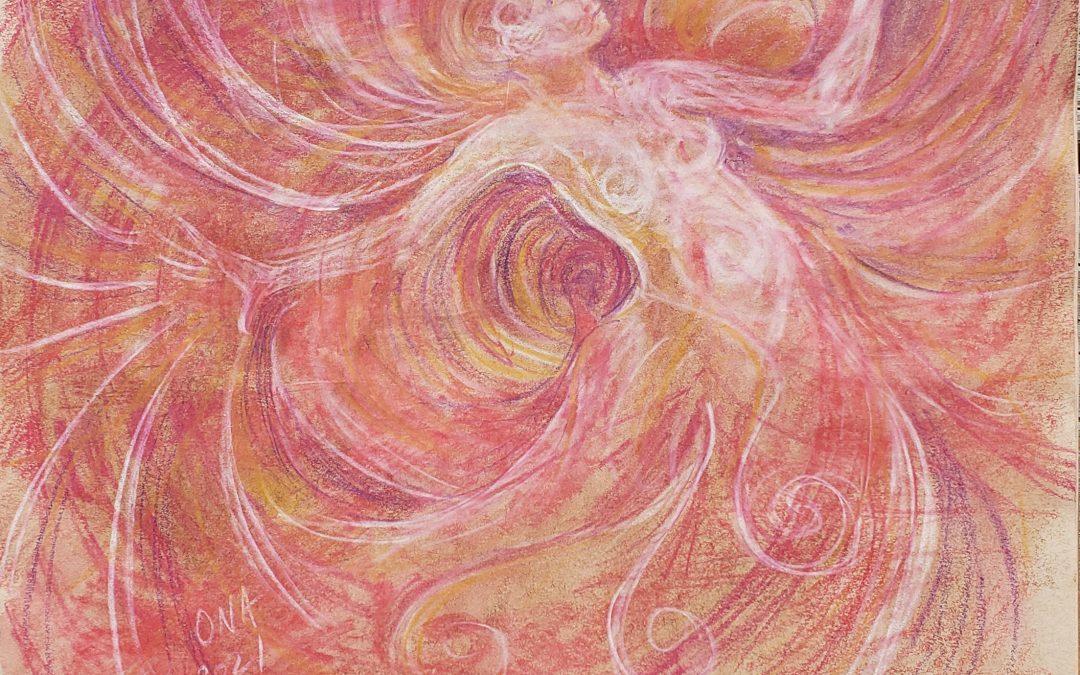 Archangel Ariel is well known as the angel of nature.  Known as the Lion (or Lioness) of God, she assists with courage, grounding, and healing. Not surprisingly, she is also an angel of childbirth. However I was recently given insight into another aspect of her – as an angel of portals, communication, multidimensionality, creativity, and evolution.

In this post, I’d like to share the recent Archangel Ariel transmissions I’ve received through art and in words. You can also watch the video if you prefer:

It all started when I met with my Wolf Pack group on Patreon shortly before the Lion’s Gate, 2021.  For that particular gathering we had decided to meet for some sacred painting practice. We tuned into the energies of the upcoming Lion’s Gate and just allowed the paint to flow.

The painting above started as pure color. First, it was all earth tones – mostly brown. Then it gradually turned to pink before the figure began to appear. So this image was birthed from the material – the images developing out of the paint on the page, rather than seen first in the mind’s eye. It gave me a clue that this spirit guide may have a strong connection with Mother Earth.

When I was done, I didn’t know who this beautiful goddess was – or was it an angel? The lines behind her shoulders really struck me as wings when I was painting…but on the other hand she felt so grounded, not as aetheric as the angels usually do.

My guidance didn’t give me a name. But they did tell me a lot about her.

When I asked my spirit team about this mysterious figure, they gave me this description:

She is a transmitter of energy – she is the Spirit of Transmissions. She exists in each of us. She is able to effortlessly receive impulses, vibrations, information from the higher realms and send them along, transmit them where needed. She assists in disseminating information. She also assists in healing, directing healing energy where it needs to go.

She is an angel* of Portals; she is a portal. (the actual word given was goddess – I believe that was my translation of it since I had asked who this ‘goddess’ was.)

She is at home in the fluid elements – ether, air, water, and also Fire. However she is able to direct the flow. She can take you where you want to go, but you must know your place and maintain the rhythm of the dance.

“Go with the flow” is her mantra but if you listen closely you will observe that she is no passive object allowing herself to be carried of dashed about by the currents, but actively dances with them, creating not just order but art out of chaos.

She is beautiful. She is a lord of mathematics as well as the arts. And she is a master of balance. She represents the unity and harmony of creative vision paired with creative action.

She dances with her eyes closed, in a state of perfect internal balance that anchors the swirling energies around her so that they become her creative fuel. The energy of the lemniscate is with her.

She is both completely balanced and centered in herself, and transcendent of herself.

Given this as a starting point, I was looking at her as a goddess of:

Or, was she an angel?

So looking at clues from the painting and the transmission and the energy they were giving me, I began to research.  After scouring the internet to find a goddess that would match the description and energy, I decided to try the angels. And bingo! Within a few minutes, I realized I’d connected with none other than the Archangel Ariel. Some of the key elements that clued me in were the pink color, the lemniscate (figure 8) energies, the lion connection, the description of her as a healing spirit, the image emerging out of earth tones in the making of the painting, and the connection with the elements.

There was no doubt in my mind this was the angel Ariel. But, the description was definitely a bit different from conventional descriptions of this angel.  It revealed to me aspects of this angel that make a lot of sense given the times we are in: Archangel Ariel as supporter of sacred change.

As angel of Nature, Ariel would be very familiar with interconnection and communication. After all, Nature and ecology are all about relationships. And as a healing angel she would be very interested in directing energy for the higher evolution of Mother Earth and all her creatures – including humans!

Once I was certain I had connected with Ariel the Archangel, I decided to reach out to her directly, asking what she would like me to know and to share at this time. This is what she told me:

“Listen to the song of the birds and the voice of the trees in the wind. The crickets’ trill and the call of the raven and the crane. The gurgle of the running stream, the crash of waves, the creaks and groans of frozen ice, the call of the owl in the night.

“Tune into these things. Plug back into the matrix of Life.

“How much time do you spend plugging into the planet, your home? Reconnect through the wind, the water, the soil, the warmth of the sun. These things are freely given to you out of Love, allow them to heal you.

“The animals, the plants, the wind, the rain, the sun, the soil, they sing to you, songs of healing, songs of love. As you take the time to listen, they will weave you back in to the pattern of Life.

“The creatures of the world, they speak to you, if you will but listen, and show you how to live. Do you see one wild creature anywhere that clings to fear as humans do? Their lives are fraught with danger yet they are content. They know themselves, they are fully woven into the fabric of the world, and they are free.

“Wisdom, oneness, is built into your blood, into your bones. You have receptors for joy throughout your being, and these are opened through connection with the natural world and with each other.

“Shed your fear, reconnect, and peace and love will find you as surely as the Sun is sure to rise.”

Do you have a connection with Archangel Ariel? If it feels aligned to you, please share your experiences with this beautiful angel!