Yes, I know it’s a little early for Easter. But this little bunny came forward for me recently and just really insisted that she has something important to say today.

When animals come into your life with that kind of presence, it pays to listen. I’ve found they always have an amazing message to convey.

Now, much of Rabbit spirit animal meaning has to do with sensitivity to the world around you, and with procreation, fertility, creativity and abundance. Rabbit is also a renowned Trickster animal. And of course it’s fabulous at running and hiding; the presence of Rabbit can indicate a need to address fear.

On the surface, bunnies don’t seem very Warrior-like, do they? They sure don’t look it! But if you really pay attention, Rabbit may surprise you.

Remember the Killer Bunny in Monty Python’s Holy Grail? The seemingly harmless and defenseless little white rabbit that sends King Arthur and his brave knights packing? Over the top, of course, but that silly scene actually contains a kernel of truth.

Rabbits are highly territorial creatures, and they will defend their space with surprising fierceness. In fact, new rabbit owners are often shocked at how aggressive these otherwise timid and sweet creatures can be.

Interestingly, female rabbits tend to be the most territorial. A female bunny’s territorial aggression has a lot to do with her primary concern – making babies and raising them safely. (The male helps by protecting her and her burrow.)

What I’m getting here is a clear Rabbit spirit animal message for creative people. Especially, creative people who tend towards having timid, quiet or sweet personalities. 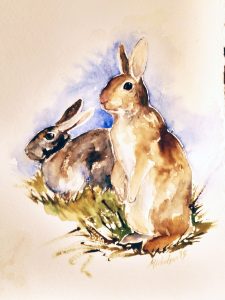 Your creative work is core to who you are. And Rabbit’s lesson is to not be afraid to defend your right to do it.

If you are a creative person – and all of us are; remember creativity shows up in myriad ways, not just the arts – and your creativity is not allowed to express itself, the result is going to be one of two things (or sometimes both):

1. You’ll start to feel eaten away, like a hollow core of your real self (this could also show up as migranes, eating disorders, and so on); and/or

2. You’ll act out your frustration (usually unconsciously) in ways that punish and/or isolate self and/or others. This can manifest as lashing out, giving the cold shoulder, nervous breakdowns, passive aggressive behavior, addictions, etc.

How best to defend your space? Let’s ask Rabbit.

Fighting is actually not Rabbit’s first line of defense in protecting her space. In fact, fighting and aggressive behavior are pretty energy-intensive activities which rob her creative energy. In addition, the raging emotions required of her in a fight put her at risk of engaging in careless behavior and being eaten by a predator. She would really rather not go there.

So, Rabbit takes great care to protect her space and warn others away from her burrow by marking her territory. Both male and female rabbits will mark their territorial boundaries by spraying urine and by rubbing rocks and plant stems with a scent gland under their chin.

Rabbit’s behavior points out the value of clearly and assertively communicating your sacred need for creative (or spiritual) time and/or space.

Now, of course I don’t advocate peeing all over your home to keep people out of your creative space. (Although it would probably work.) But actively communicating in a confident and assertive (rather than aggressive) way means you can remain the sweet, gentle person you are without losing it or having a nervous breakdown.

Have trouble with this? Strengthening the solar and throat chakras is key. But that’s a topic for another day! 🙂 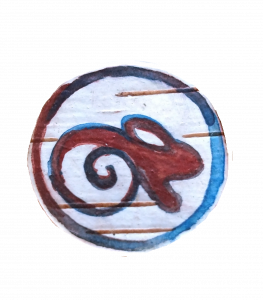