What is the spirit animal meaning of the Nighthawk? 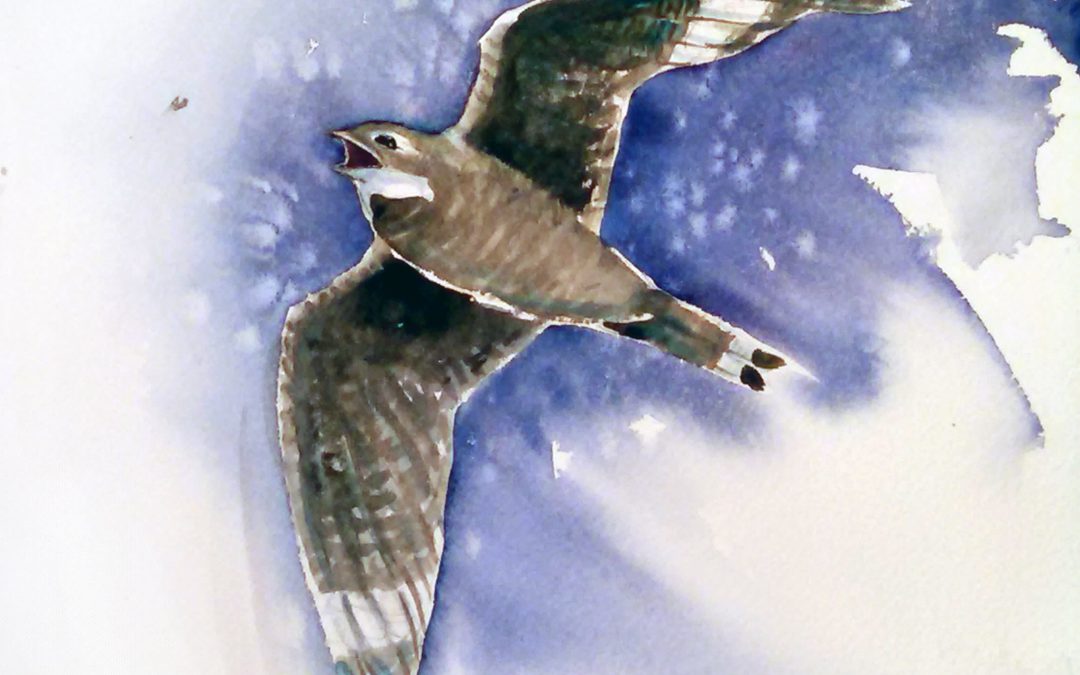 In an international study conducted by Adobe, slightly over 50% of U.S. respondents, and 39% overall, considered themselves to be creative people. What’s more, the overwhelming majority viewed creativity as being valuable to society and a key driver of economic growth.

However, when the same people were asked if they thought they were living up to their creative potential, the story changed. Only one out of four felt that they were.How about you? Do you feel your creative self could use a boost? Perhaps it’s time to pay a visit to Nighthawk.

Nighthawk is a wonderful spirit animal for creatives of any type – healers, artists, musicians, writers, entrepreneurs, or anybody who uses their intuition. I’ll explain why in a moment. First, though, let me introduce you to this bird.

The Nighthawk is not actually a hawk. It’s a member of the nightjar family, which is related to the whippoorwill. With its long wings, stubby body and round head, it looks a bit like a bat. In fact, Nighthawks have a lot in common with bats. They, too, are a crepuscular animal, meaning they are most active at dawn and dusk. Like bats (and unlike hawks), they feed primarily on small winged insects.

If you live in Nighthawk territory and spend much time outside, you’ve probably experienced them passing overhead on many occasions. They are more common than many people realize. Nighthawks are often mistaken for bats, because they swoop around in a very similar manner to those flying mammals.

Nighthawks spend a lot of time on the wing. They have big eyes and very small bills, but don’t let the small size of the beak fool you. A Nighthawk’s mouth is incredibly wide, and that is its secret to success. With its massive mouth open wide, it flies through the air and catches insects for its dinner.

At first, the Nighthawk may strike you as a drab-looking creature. With its unpretentious, mottled brown and gray coloration, it rarely gets chosen for posters and calendars. However, if you ever get the chance to see one up close you will appreciate the utilitarian beauty of its plumage. Because it nests on the ground, it has beautiful barred feathers which blend in perfectly with fallen leaves, dry grass and gravel. On its underside, though, it does sport white patches that show up when it takes wing. These include a white “V” on the throat and white bars across the tail and wings. The wing patches sometimes create a flashing effect as it flies.

Like many creative people, the Nighthawk is quite adaptable. It’s capable of thriving in many different habitats, although it prefers open areas. You’ll even find Nighthawks in the city, where flat urban rooftops provide safe places for them to lay and incubate their eggs.

The Nighthawk is a spectacular spirit animal for creative people and anyone interested in accessing their intuition or searching for higher truth. That is because it represents a bridge between the spirit and the mundane.

This is reflected in the time of day when it is active –neither night nor day but both. It takes flight during those magical ‘between’ times when our intuition tends to be a little stronger. Most traditions align the darkness with more of a feminine energy, and the light with masculine energy. Crepuscular animals like the nighthawk combine both. That is a very powerful thing. (In fact, psychological testing has repeatedly shown that highly creative people tend towards being “psychologically androgynous” – incorporating more of the psychological characteristics of the opposite gender than average.)

Staying Grounded While on the Wing

Even though the Nighthawk spends a lot of time on the wing, it nests on the ground. Like all creatures that fly on the wing, it can be a helpful guide when we are undertaking in higher purpose, spiritual work. But because it is a ground-nesting bird, the Nighthawk offers that down-to-earth connection, too.

Sometimes it’s hard for people who are interested in expanding their spirituality to ground themselves and to relate to and function well in the physical world. If you are having a hard time feeling grounded, if you feel like you’re walking 2 feet above the ground, or if people accuse you of being spacy, the Nighthawk is a wonderful spirit animal to spend some time with. It can help you ground yourself without leaving that wonderful ‘upper realm’ kind of space.

On the other hand, this bird doesn’t actually build a nest on the ground; it just lays its eggs directly on the ground and sits on them. If Nighthawk appears to you, it may be a sign to pay attention to your ‘nest egg.’ Are you tending to your savings and your retirement plans the way you should?

Opening to Inspiration and Abundance

Another wonderful lesson Nighthawk offers to creative people can be learned by observing its feeding habits. The Nighthawk actively sights and chases down its prey, which represents clarity of vision and the willingness to take action. Its fluid swoops and dives as it moves through the dusk are heart-stoppingly beautiful; like a sort of aerial ballet. At the same time, this bird totally opens itself to receiving. With that big, wide-open mouth, it effortlessly opens up and lets the nourishment come in. It is very, very open to abundance.

Often very creative or spiritual people have a hard time learning to receive. That image of being totally open to taking what you need in order to do your calling in the world is a wonderful one to keep in mind if you struggle with abundance. It can relate to both material and creative abundance. Remember the white bars on the Nighthawk’s wings? You can think of those as the flashes of insight that come to you when you put yourself in motion in the practice of your art. In other words, if you find yourself struggling with creative blocks, imagine yourself as a Nighthawk. Relax into the physical process of doing your work. Enjoy the flight – the process of your creative work. Trust that Spirit will provide the insight you need. The outcome will take care of itself.

In short, the Nighthawk symbolizes remaining open to Spirit and being willing to receive what Spirit sends your way. That’s where your creative inspiration or healing work comes from, after all, isn’t it?