One day when we were still living in our old farmhouse in central Illinois I saw a snake in the tall grass in back of the house.

It was large – very large. Must have been at least 4 feet long. The sinuous body was covered with shiny scales arranged in a stunning pattern of brown on tan. I couldn’t see the head but when I took a step closer the end of the tail came in sight. I froze as the tail shook and vibrated, making a rattling sound in the grass. How strange – it wasn’t much of a rattle. I wondered if something had bitten off the end of the tail.

And yes, I was freaked out.

Later I caught sight of it a couple more times and got a good look at the head. Hmm. Not your typical triangular rattler head. But it DID so resemble a rattlesnake…

Intrigued, I looked up Illinois snakes. It soon became clear that we had nothing to fear. This was a Prairie Kingsnake.

There are quite a few species of king snake, and all are beautiful. Many come in vibrant colors and 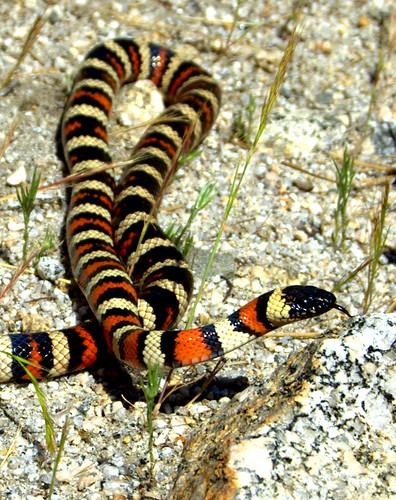 striking patterns. They are non-venemous, and are often kept as pets because they are docile and easy to keep.

However, the Kingsnake is no wuss. In fact, it is one of the few creatures that will routinely eat rattlesnakes. It has immunity to the venom so can swallow them fearlessly.

As a Power Animal, I can’t think of a better symbol for protection and self-defense than the Kingsnake. Like a master martial artist, it seems to have prepared itself for nearly any type of assault, judging by this list of the Kingsnake’s defensive devices (courtesy of desertusa.com):

Kingsnake teaches us that when we have several defense strategies to fall back on, and are willing to take a no-nonsense attitude, we will usually pass through life unmolested.

Also, there is great symbolism in the way it eats its rattlesnake prey. The Kingsnake is a constrictor, literally hugging its prey to death. So when toxic energy comes your way, remember the Kingsnake and the power of love to negate it.

This is a piece I started a while back and put aside. Probably time to dig it out and finish it, eh? The snakes featured are all venomous snakes. The Kingsnake would consider them lunch.