What does Ferret mean as a Spirit Animal? 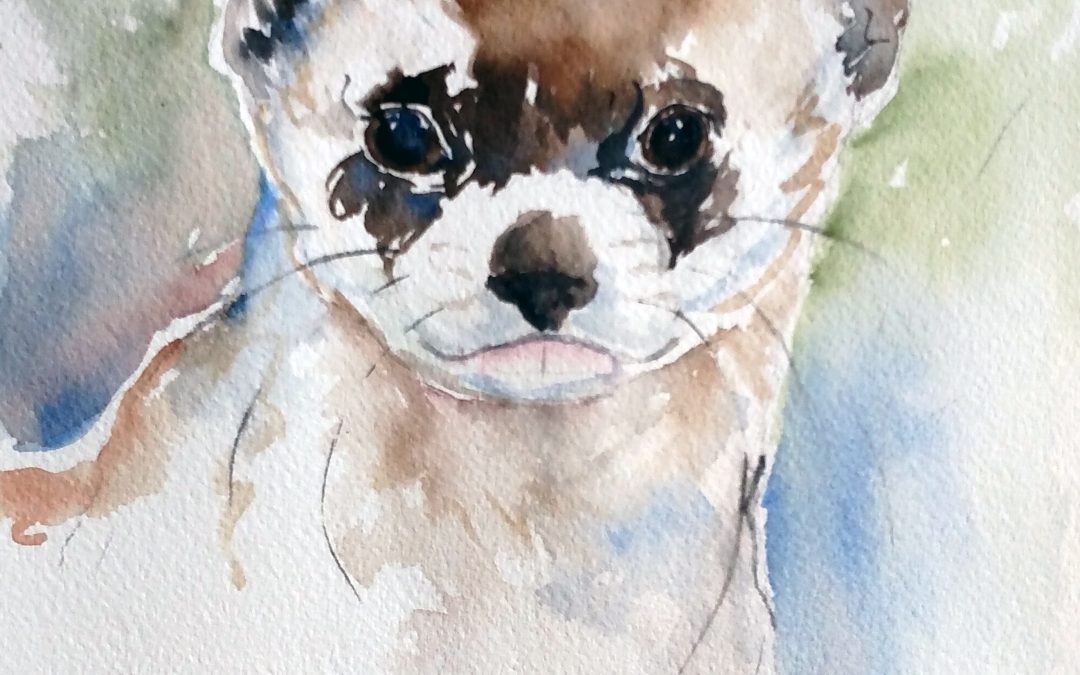 People who receive my spirit animal readings are sometimes surprised at what animal comes up for them. It’s sometimes an animal they never would have thought of.

No disrespect to spirit animal oracle cards (I’m working on creating a deck myself), but that’s the beauty of doing it on pure intuition. It can literally be ANYTHING.  For instance, I had a 5-lined skink come up for someone once – and it turned out she had a previous connection with the animal! (She actually has a skink skin she once picked up and the reading brought attention to some relationship healing that needed to happen in relation to that incident.)

Anyway, Ferret came forward in a reading I did recently, and since it’s an animal that doesn’t get featured very often, I thought I’d give him a chance to sit in the spotlight today. Please feel free to share this post with anyone you know who is fond of Ferrets! 🙂

The common name “ferret” includes any of a group of animals in the Weasel family, including the Black Footed Ferret of North America, and the European Polecat. (Domestic ferrets are thought to be descendants of the Polecat.)

Ferrets are carnivorous, and ferocious hunters. As such, they definitely speak to the Warrior within us – and they have lessons to offer both for when our Warrior energy needs some encouragement, and for times when it might be coming on a bit too strong.

In English, to “ferret something out” means to track down something hidden and bring it to light. A ferret’s long, low body allows it to go down into the burrows of its prey (such as rabbits or prairie dogs), where it often takes its sleeping prey by surprise. Ferret can help you uncover hidden blocks and energies in your own psyche – sometimes ones that have been buried for a long time. It takes courage to work with Ferret energy, though, because it will ask you to hold yourself to your own truth.

Once you’re connected, though—watch out! Ferrets embody the word FEARLESS! An awesome super power for when you are going after your goals, or entering into any kind of David and Goliath situation in standing for your truth. Not so awesome if you are simply rushing in where it would be more prudent to walk away and live another day.

One of my readers, Sally, who kept ferrets for many years, says:

“Ferrets are sometimes foolishly fearless, they lack fear so much that they have never even heard of the word! They will often attack a huge hunting dog or pitbull or a cunning hunter like a feral cat without second thought or thought at all.  However, in times, in need of fearlessness, the ferret is a great inspiration.”

Ferret does take shelter in the earth, so balance those fiery warrior tendencies with the more earthly qualities of discernment and strategic thinking. Cultivating good people skills, including negotiation, is a good idea, too.

Ferrets and weasels sometimes have a negative connotation in English, as being sneaky or sly, and even thieving. That can indeed be the shadow side of this power animal, and a ferret person may find themselves tempted on occasion to hide the truth from themselves or others. The little bandit mask on many ferrets is a visual symbol of this type of energy.  However, this aspect of Ferret has its positive side, too. When a Ferret person is aligned with her higher self she can put that tenacious, let’s-bring-it-to-the-light-and-get-it-done kind of energy to use in a way that contributes to the highest good.

Like many weasel-family animals, ferrets will sometimes engage in what is known as the “Weasel War Dance”: a ferocious-looking, frenzied display that is supposed to disorient its prey. What can Ferret people learn from this? The value of posturing! Attitude is everything, and putting on a mask of confidence when you have to negotiate or are in a shaky situation can make all the difference. (Another observation from Sally: “I feel they dance around doing the war dance also because they are trying to take their enemy off guard with comical behavior. They’re trying to laugh you out of your attack towards them. They do have a way of charming bigger and better predators than themselves.”)

Keep in mind here, too, another characteristic of the Ferret: like most weasel – family animals, they have musky – smelling scent glands under the tail. Translation? Don’t be afraid to make a stink if you have to! Or conversely: Are you making a stink unnecessarily?

If you find that you attract a lot of conflict, though, remember that a Ferret’s little war dance can also be an invitation to play. Keep the competition friendly and open yourself to creatively “ferreting out” solutions that allow everyone to walk away with their dignity and livelihoods intact – if not actually finding win-win ways to do things.

Finally, a word about our native ferret, the Black Footed Ferret.

One of the benefits the Black Footed Ferret brings to people is to keep the prairie dog population in check – and in the process, reducing outbreaks of bubonic plague, which those animals can carry. Once thought extinct, this feisty little guy is making a comeback with the help of the U.S. Fish & Wildlife Service and other organizations.  That makes him an awesome power animal for Survivor energy! 🙂

To find out more about the Black Footed Ferret, and/or to donate any amount to help this beautiful animal stay here on the planet with us, visit the nonprofit Prairie Wildlife Research website: http://www.prairiewildlife.org/support.html